Now that the Makeover is over I wanted to do a wrap up.  Thank you to all that have followed T-Rex along his journey.  He has been a joy to work with and will continue to thrive in my program until is special person finds him.
T-Rex placed 12th in the Field Hunter division.  Phenomenal for a horse that had only actually hunted once, back in March!  He was a bit tense and didn't show his best colors in the flat portion, which really made all viewers cautious of him.  Then the Mock hunt, which he of course was excited for, but he took it with stride and played along.  The grass was slick with dew, and we had a slip that the judges only saw the end of and had thought he had acted up, but T-Rex in his gracious way picked his head and neck up (with me hanging on to it) and put me back on his back without losing a stride.  The horses didn't want to lose me, he just slipped and lost both of his back legs out from under him! Staying on top though left us with a salvageable score.  The individual test was a long wait, we were towards the end of the group and stood for 3 hours waiting.  The poor guy was asleep and bounded over the first jump a little stiff, but then it was game on! He went over every jump like it was nothing, water woohoo, he even got a good gallop in up the last hill to the stop.  He stopped with grace and stood on a loose rein.  The last jump all the horses were having problems with and I couldn't decide how to approach and last second decided to just trot (well lets be serious almost walk) up to it and he popped right over it with no doubt in his mind!  He truly wants to be a handy hunter! We went through the stiff gate (wishing I had some WD40) with no problems at all and walked away with a pat on his neck and a tired.
Next it was onto Competitive Trail division.  This division was tough.  The obstacles were tricky, but nothing T-Rex was worried about.  The water was no problem at all, the ditch wasn't scary in the slightest, the mail carry was tricky but not hard.  We had to make tight turns and change leads while carrying a saddle bag, which T-Rex called torchere because you just are supposed to grab the mail and take it back to the house?  He didn't mind the pulley system for the bag into the tree, and was patient for me to tie it off.  The next obstacle was a struggle because right as we started a 4 wheeler and then a dirt bike went vrooming by, distracting my poor ottb who then saw the carriage horses and then he was sure there was more to eat him!  we calmed down but the next obstacle though and was ready to see the chickens and back through the Z.  The noodles and tarps were cool itching devices to T-Rex, because why else would someone hang pool noodles up?  The bridge was super slick, and after watching everyone else end up sliding off or teetering the bridge, I asked T-Rex to take little baby steps and have a smooth encounter.  We finished the course and then carried the tired puppy, Luna on back to the barns! all and all a super fun morning.  We finished 11th, this was so close to the prizes I could taste them but he was super good and I couldn't complain.  Enjoy the photos and videos, and scroll down for  the rest of his year.

Thank you to our gracious sponsors! 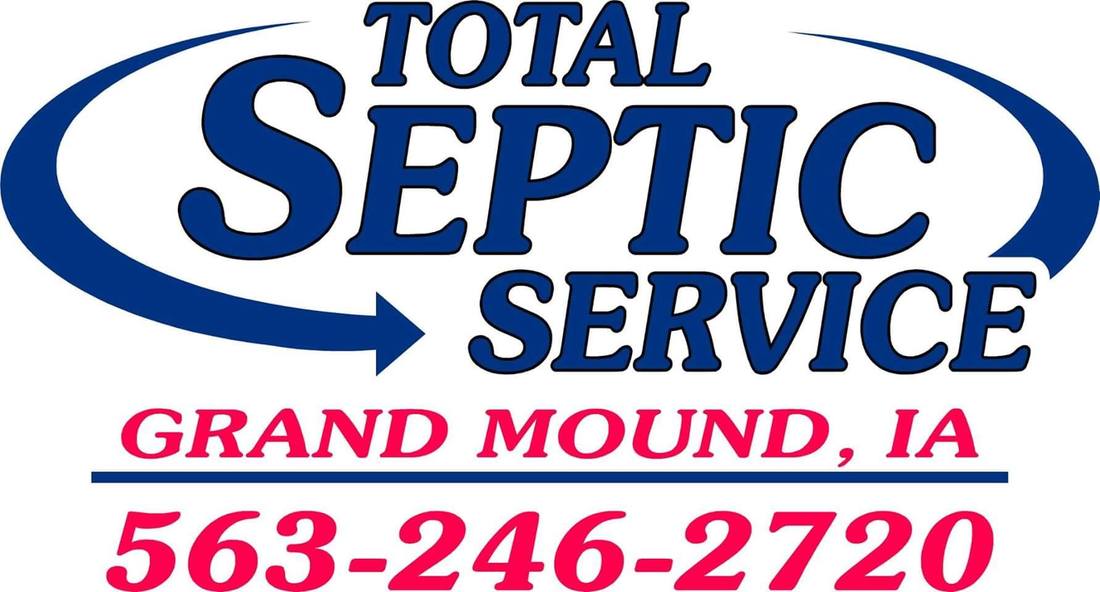 I huge thank you to Horse and Community magazine for using me and T-Rex as their featured equestrian for June!  The magazine is focusing on ALL aspects of horse life in the quad cities and surrounding areas.  Please consider a subscription (free currently!) and an ad in the publication.  Read the article online and check out her other great reads at the link below.
Horse and Community Publication

Magna Rex meaning Great King, lovingly nicknamed of T-Rex (King of the Dinosaurs)
2012 Bay OTTB Gelding Standing approximately 16 hand
Last raced Oct 9th, 2016, with $88,000 in earnings
Entered the Alluring Equine program November 13, 2016
The Great King's round table is filling up, as everyone who meets him loves him. ​ 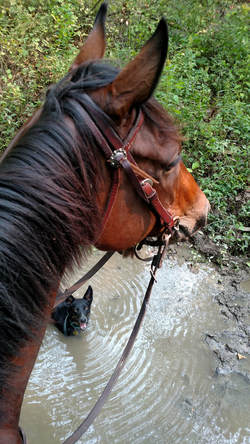 Labor day weekend camping and trail riding trip!
A fun filled weekend with cowboy trail obstacle course, trail riding and lots of rolling in the arena to get dirty.  We led the group for 1 day, went out on our own, and took up the back.  Experienced the teeter totter for the first time, and got soooo much hill work done (work those butt muscles!).  T-Rex main goal for the weekend was to relax while building muscle, and finding our feet over some tough terrain.  We made new friends and had a nice relaxing experience, which is the most important part.  Might I add, that although many campers/trail riders joked that he was big enough to clear all the cobwebs, many didn't guess him to be a OTTB and were amazed by his stocky build and his amazing brain.  I am sure we are slowly decreasing the stigma many area riders have against OTTB horses.

Less than a MONTH till Kentucky!!!
​ 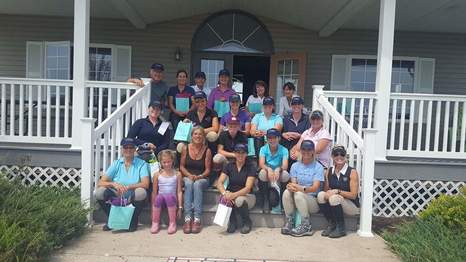 Bridlespur's Fox Hunting clinic
The clinician's were amazing, the new friends were many, and the experience was priceless.  Thank you Bridlespur hunt club for helping T-Rex's and my confidence all weekend.  Thank you to our clinicians, Kylin Coulter-Myer, Eleanor Hartwell, and Janet Metzger.  Everybody loves a good OTTB around the club.  We were able to school some fences, and even went roading on Sunday with the hounds.  The hounds really are the best part of this sport.   T-Rex was so good, minus those darn horseflies!  We must remember some good fly spray everywhere we go.
​I am officially counting down the days for Kentucky.  Taking along my new stock tie and pin, that i won in the best tied stock tie competition. 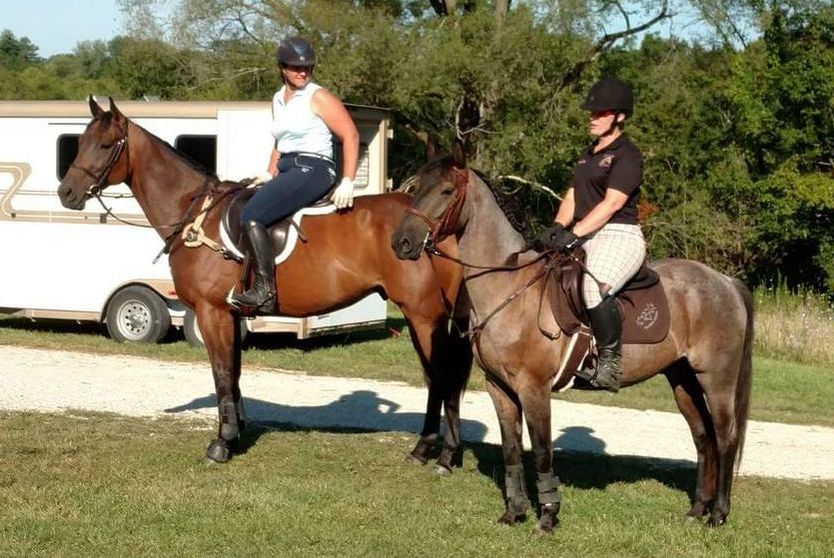 A trip down roading with the Bridlespur Hunt club on August 12th.  Sara needed a horse so T-Rex was her man! We jumped some of the big logs and coops for the first time this weekend and we road with the A flight.  A flight for T-Rex was no problem at all!  We even brought along my husband's pony for me!
Over the July 4th holiday T-Rex traveled to his first camping and trail riding trip.  As you can see he was quite enjoying the little bit he got to do.  Handling the bridges, water, etc.
In June T-Rex traveled to his first show.  I chose to just school around some of the fences rather than show so that he could relax and have an easy first experience.  Last minute horse problems left my student Jacob without a horse, so he used T-Rex in his equitation  flat classes for the weekend and was carried to second place in both of his classes.  T-Rex was wonderful, I foresee no problems with him accepting the environment at the Kentucky horse Park, but there are still more experiences to come!  His only opinion was that the weekend was exhausting. 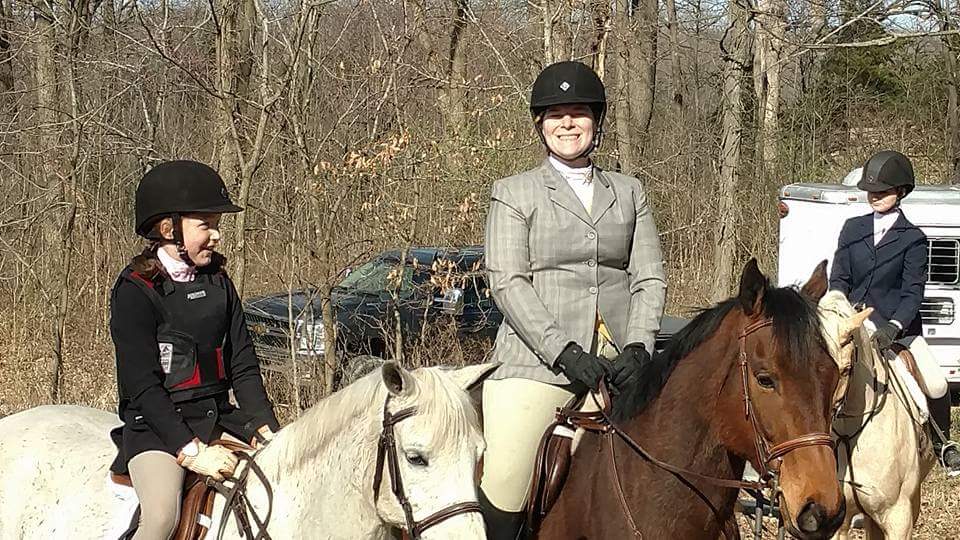 T-Rex went on his first fox hunt on March 22nd, and was a total champ! We rode in the B field, as he had been on a little R&R thought the winter months.  I could not have been happier with this horses brain!  While all the hunt horses began getting amped up for the ride, T'rex just looked around and stood totally still taking mini naps.  On first departure he got a little tense during first trot /canter sessions, but quickly realized it was nothing to be concerned with.  About halfway through the hunt, I started to notice that he was figuring out how to regulate his pace with the other horses all on his own, and was able to ride sections on a loose rein.  When we finished for the day, I smiled from ear to ear realizing we had both survived and had no major arguments and no blow ups.  He was happy with himself as you can see from the photos.  As soon as I got his saddle off he decided a roll was a must!  All the other riders were so impressed with his attitude with it all, and for a horse to feel so relaxed to lay down at the trailer usually takes a whole season or longer to accomplish.  I am over joyed with him, and will not be sad if he sticks around for a while in my program.  :-D